by Tony
Start with the pack of 2x nixies (1x IN-19B and 1x IN-8-2), take them out of their packing and straighten the wires, spreading them out slightly to match the diameter of the socket. If any are uneven or slightly longer than the others you can trim them a little to match.

Note the white ceramic paint on one of the wires inside the IN19, at the back. This is the anode and must face directly to the back of the PCB when fitted. Ignore the short wire stub at the front of the IN-19, it's a second anode which isn't counted as a real pin and can be removed if preferred.
The same 'anode' lead is missing from the IN-8-2 nixies though it faces the same way - so the gap in the pins is positioned over the '12 o'clock' socket pin, leaving it unused.

Take the numerical nixie tube from the pack of 2:

Starting with that gap where the anode wire would have been, position it over the topmost hole of the socket in the V5 position then push one wire in sequence into each hole. Make sure the missing lead 'gap' is still in the correct place, it's easy to slip one place whilst fighting (or fitting) it in. Push it down carefully into the socket pins until it sits on top of the LED - this acts as a spacer holding it above the PCB in the correct place. (You can fit them in any order you're happy with, I usually work from right to left).

This is shown on the thermometer PCB but the sockets are used in an identical way in the clock: 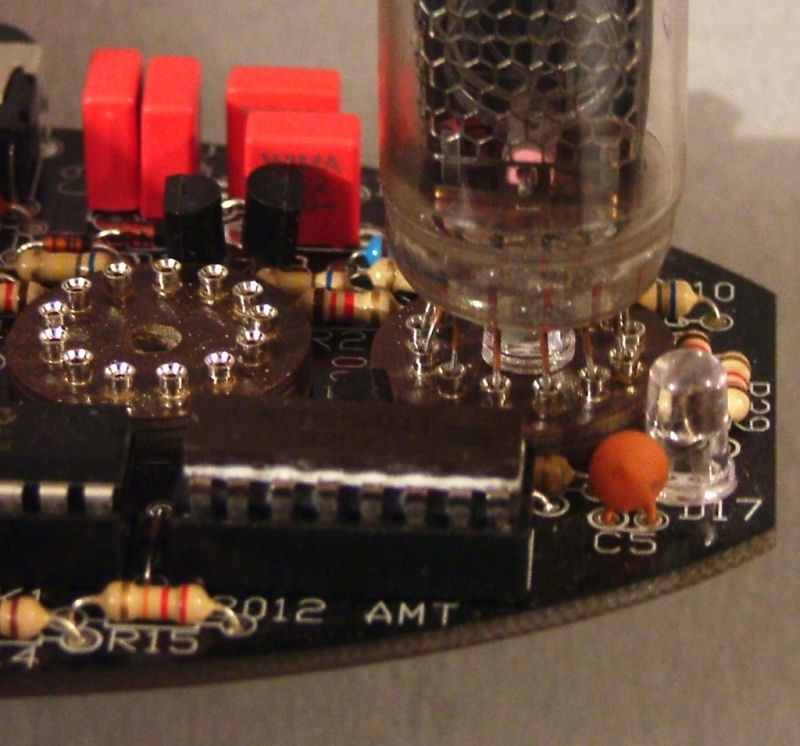 Take the 3x IN-8-2 nixies out of their packing and straighten the wires as before. Fit one into the socket for V4, next to V5 and fit the IN-19B(V) tube into the V3 socket, followed by the remaining 2x IN-8-2 nixies in V2 and V1. You should now have 2 pairs of numerical tubes separated by a symbol tube in the centre.

Once you're certain they're in the right places and are vertically aligned you may wish to solder 2-3 of the wires into the socket pins to prevent them being dislodged, though in everyday use they will stay in the sockets as the 12-13 wires combined have quite a tight hold. 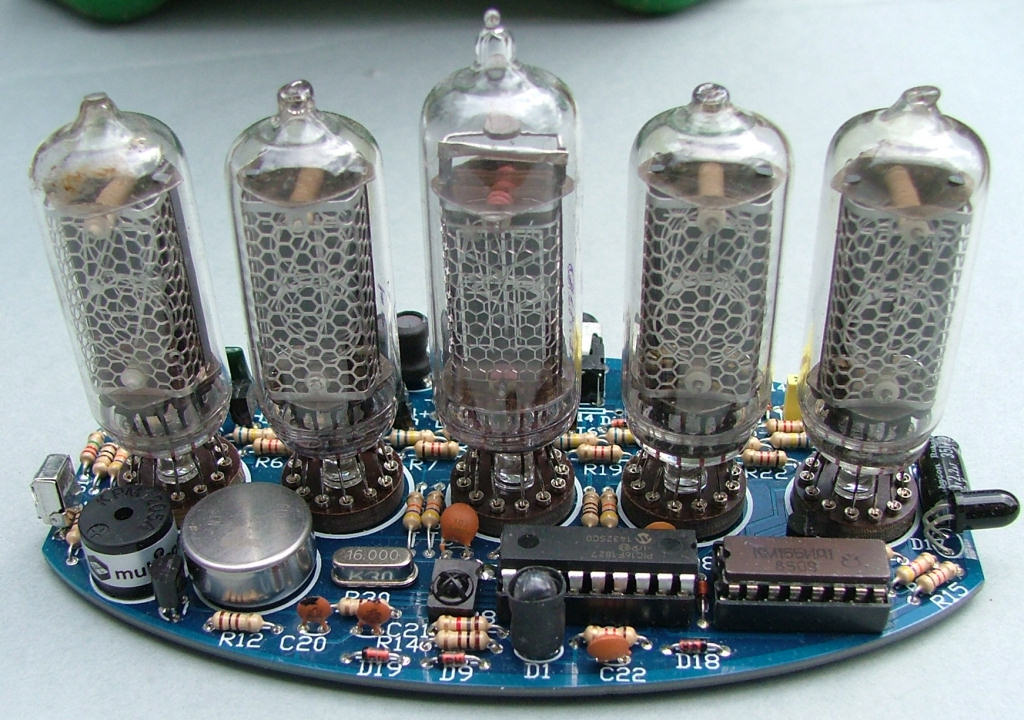 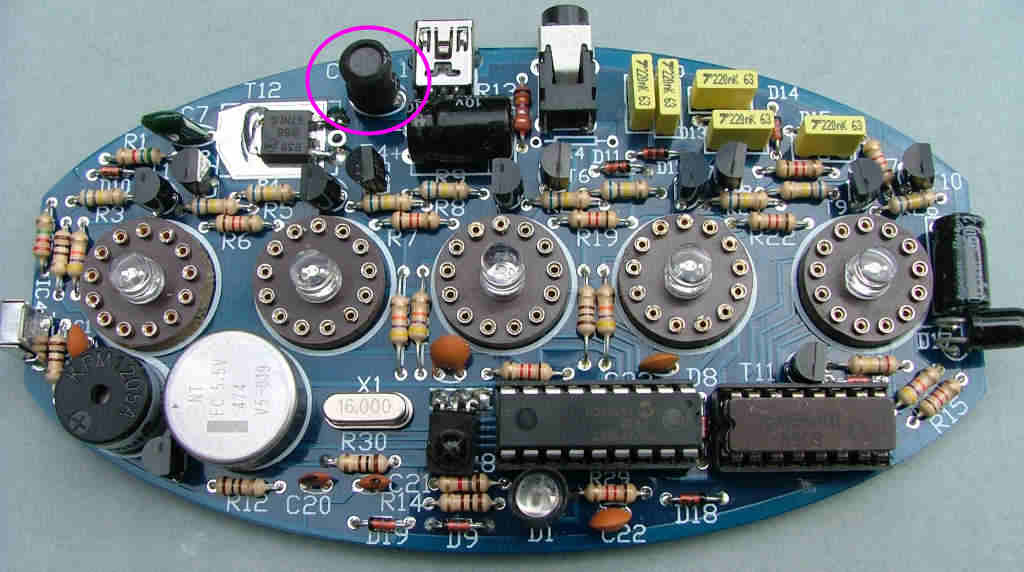 by Tony
This is probably a good time to mention from this point, DO NOT TOUCH the board whilst powered and allow 30-60 seconds after switching off before handling it, it's now generating 180V+. It's at a low current it will still bite and could be dangerous in the wrong circumstances (Note the wrong circumstances are probably when you'll touch it).

Connect the mA meter again to the space marked for R13. Connect the USB power supply and switch on, watching the meter. This time if everything is working the current should be between 250-300mA and the blue LEDs and nixies will light up - if not switch off quickly and recheck everything, mostly around T12,C6 and the resistors/transistors behind the nixies.

If everything went OK you should now have a display similar to 00+00 with flashing decimal points and a colon cycling between + and -. Now finally fit the fusible 0.47R resistor in place of R13 and let it run for a while.
***The fusible resistor has been replaced by a 'polyfuse', a light brown resin disc marked 'XF030' 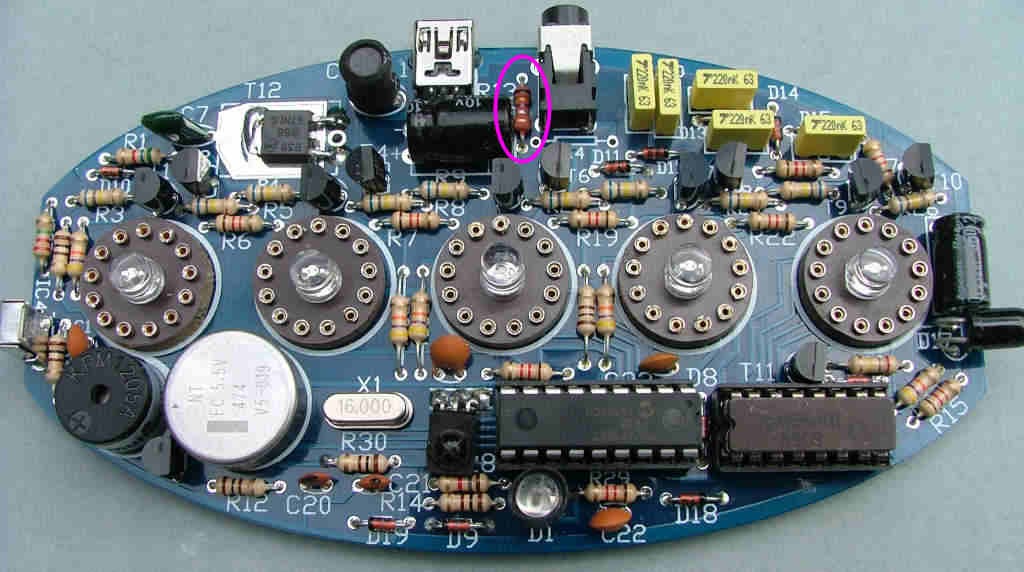 by Tony
The final component is the memory backup battery. Power down the clock and wait about a minute. Take the 0.47F capacitor out of its packing and bend the pins so they're pointing down, at 90 degrees to the base, ready to insert into the PCB. FIt it into the place marked C2, the band on the case top is the negative and faces the front.
Only fit this when you're certain everything is working as it should and if you need to do any work to the PCB after fitting it wait for 1-2 HOURS before doing so or use the included 470r resistor to short the battery terminals for a few seconds to discharge it.
Before powering up again, go over the PCB to make sure there aren't any long tails or solder blobs as there's only 1.5mm clearance between the board and the copper base. 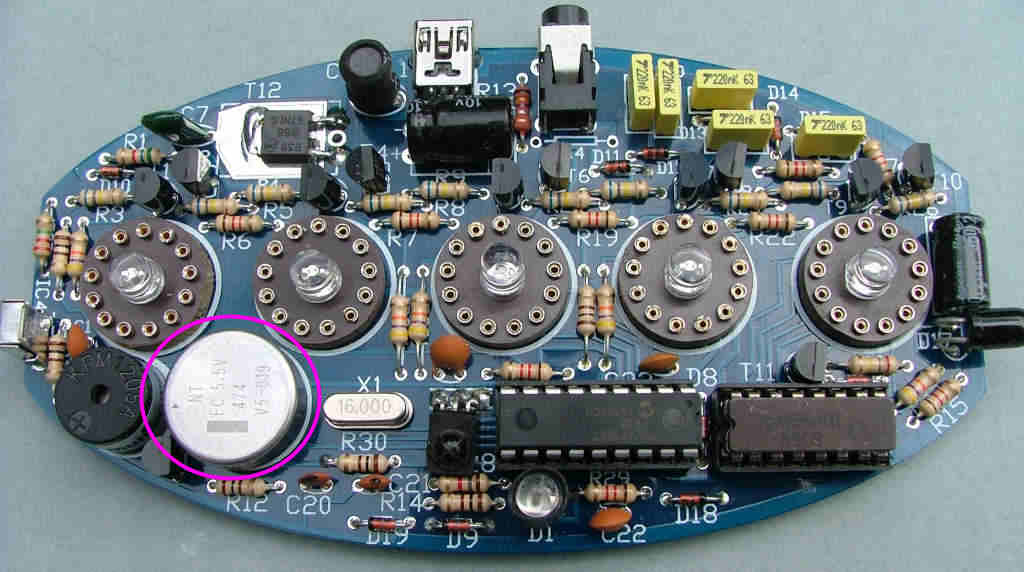 by Tony
Before building it into the case, cut a piece of heatshrink sleeving about 1/2" long and slip it over the IR LED D1. The idea is to form a light pipe between it and the case lid to prevent reflections confusing the detector.
Correct operation of the IR sensor is essential once it's cased as it is the only method of controlling the clock.
All times are UTC+01:00
Page 1 of 1